I’m a little late in writing this review, but it’s been quite the month!

I decided to sign up for the Western Pacific 5k because my husband Rob signed up for the full marathon.   If you’ve read past reviews of mine you’ll see how much I love Brazen races and this is no exception.

Brazen runs their races like a tight ship.  Well organized, well attended and the best after race food EVER (bear claws and powdered donuts…YUM)!  Not to mention, I love their shirts. 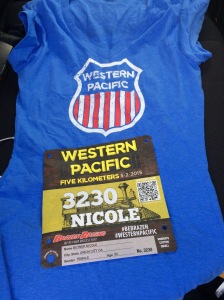 I got there really early for my husbands start.  He decided to downgrade from the full to the half, so his start time was 8:00am and mine wasn’t until 8:45, so after he started I had some time to kill.

Rob off on his run!

LUCKILY, one of my very good friends signed up for the 5k too, so I was pleasantly surprised when she found me and we hung out before our race start!  YAY for friends.

8:45 on the dot we were off.  It was an easy loop around Quarry Lakes, fairly flat all the way around on gravel/dirt.

Cristalle and I stuck together for the first mile and a half, then I went ahead to finish.  I was feeling really good, minus a slight heel pain.  I finished at 28 minutes, not a PR, but I found out I placed SECOND in my age group.  YAHOO!!! 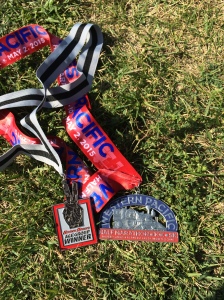 I spotted Cristalle finishing and cheered her in.  She didn’t find out until later, but she placed in her age group too!!  It was a good day for us! 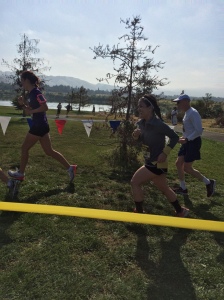 Cristalle bringing it in!

A little while later Rob came in from the half, not a great race for him, but he finished strong.

We grabbed some food and hung out for a bit and went on our way.  It’s always so fun to run with friends, to have people to chat with before and after the race.

Next up, Tinkerbell Half Marathon re-cap (spoiler alter: it was a great weekend).

Endorse me on Sverve!